The M113A2 is a modernized version of the US Army troop transporter M113A1, which was already deployed as “Battle Taxi” during the Vietnam War. Depending on the vehicle’s type and multiple purpose, it can carry up to eleven fully equipped soldiers. The M113A2 has been manufactured since 1979 and generally appears as a very small tracked vehicle compared to others. Nevertheless, it has been proven itself as a perfect all-rounder. It is accelerated by a 212 hp turbo diesel engine to a maximum of 37 km/h, and has a standard weight of around 11.5 to. With the A2 modernization the vehicle has been fitted with additional tanks to both sides on the back side. Thus, the operation range could be enlarged from 200km to 300 km compared to the A1 version. Moreover, suspension and cooling systems have been specifically improved for the desert use.

The illustrated model shows a M113A2 in a typical appearance during Operation Iraqi Freedom in 2003. It provided versatile support in transportation, technical and medical assistance as well as in the protection of the deployed US forces. Meanwhile, the M113 is partially replaced by other vehicles such as the more modern "Stryker" platform. In some areas, upgraded versions of the M 113 still remain in the race.

The core of my M113 project is the above mentioned Tamiya kit. The kit showed usual solid quality and doesn't leave much to be desired. Nevertheless, I ordered some upgrades from the aftermarket offer as listed above.

The assembly brought as expected no bigger surprises. After I had finished and primed the fuselage, I made my first experience with tin-made Friul chains. Those of you who ever had installed these components on their own tank model, exactly knows what I’m talking about when I say... it seems to have no end. However, after around eight hours knitting, I was quite satisfied with the results... To bring a more rusty and dusty structure on the rather bare chains, I sprayed them with paint and dipped them in ordinary flour. After drying I applied the final paint as well as washing and dry-painting effects. For painting the base coat I used Model Master US Army Sand. On this, I applied diverse details by using various acrylic paints from Vallejo and Revell. For the washing I took more or less thinned oil-paint in "Burned Umber".

Next, there is the loading or rather the mess of things fastened everywhere on the M 113. When looking on different reference pictures from the Iraqi wars, it was found that this stuff often covered the majority of the vehicle’s surface. As already named above, I used a Stowage set provided by Verlinden Productions and collected some treasures from my rummage box. The US flag and maps were found in the web and simply ink printed. The figures came with the Tamiya kit.

Far after completion I decided to add a socket, to put the vehicle in a more realistic environment and to carry the M113 better and with more safety. So, I took a small wooden picture frame and formed with plaster and sand a little desert terrain. The plants are mini-branches of some kind of a withered houseplant that I sealed with matt varnish.

All in all, the kit itself is molded very detailed. With a wide range of aftermarket material which is currently available, the kit offers multiple creative possibilities! 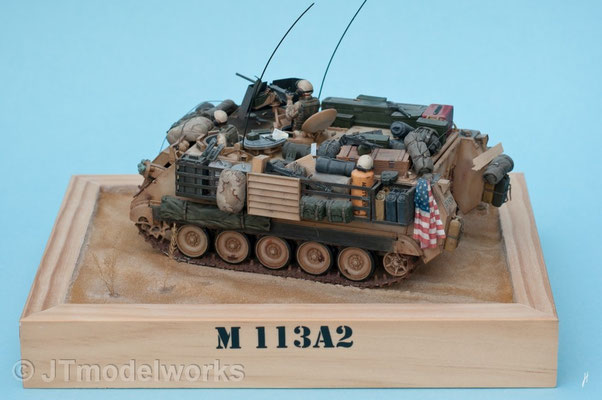 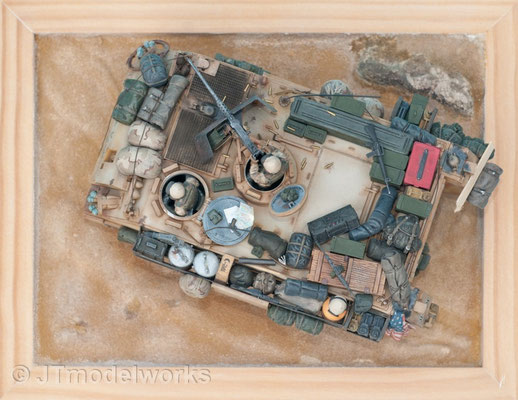 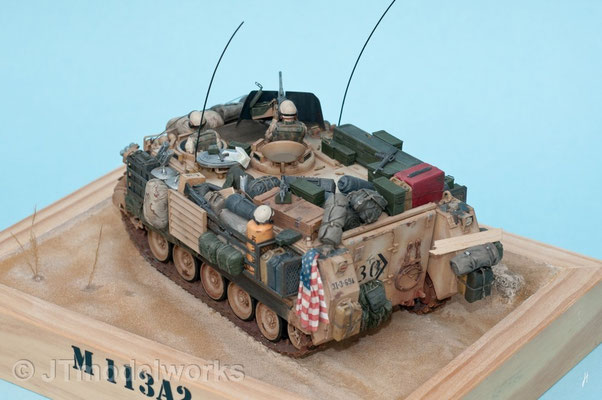 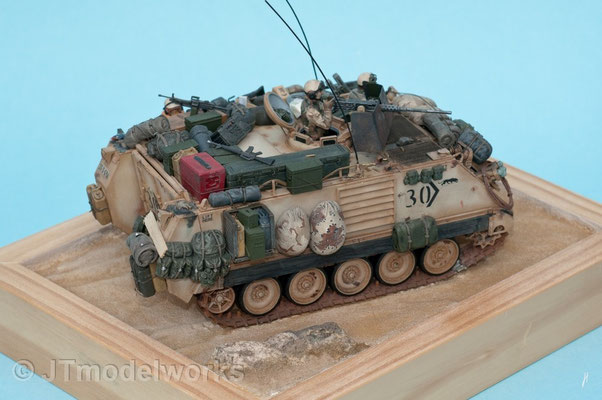 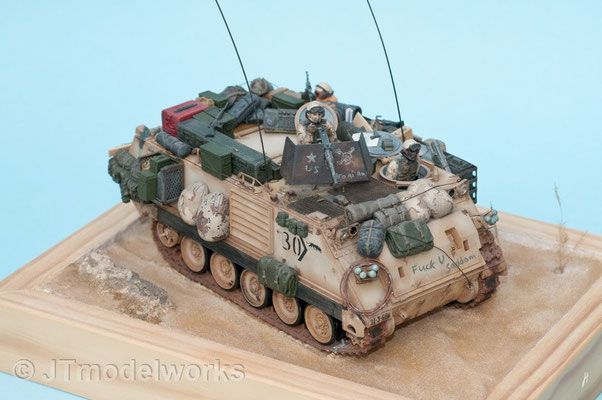 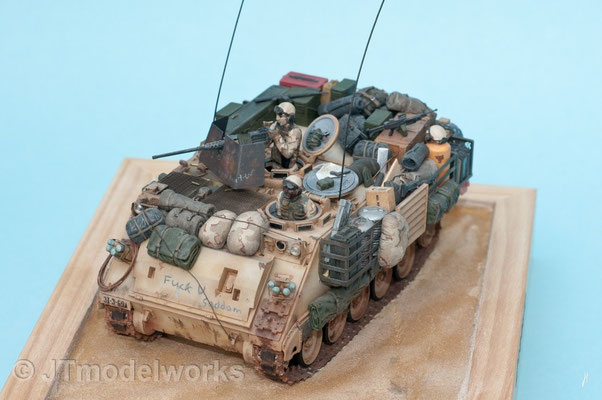 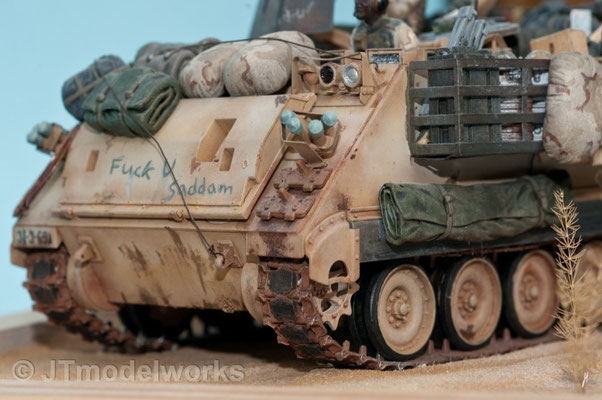 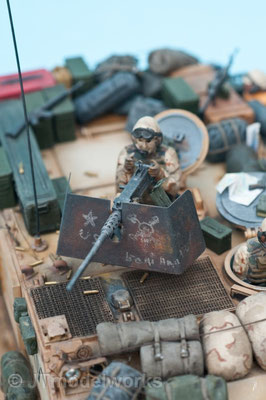 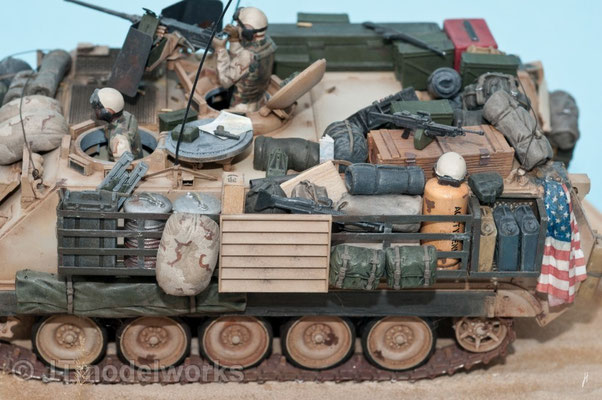 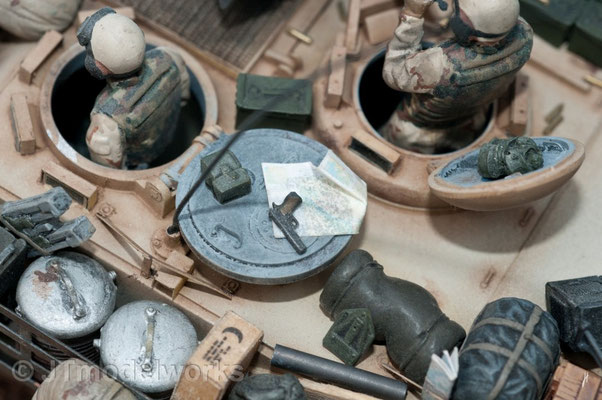 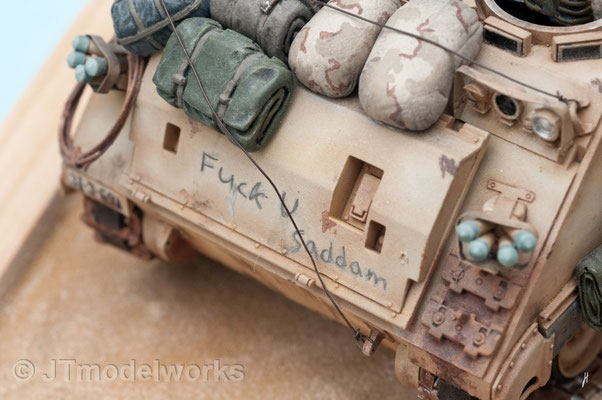 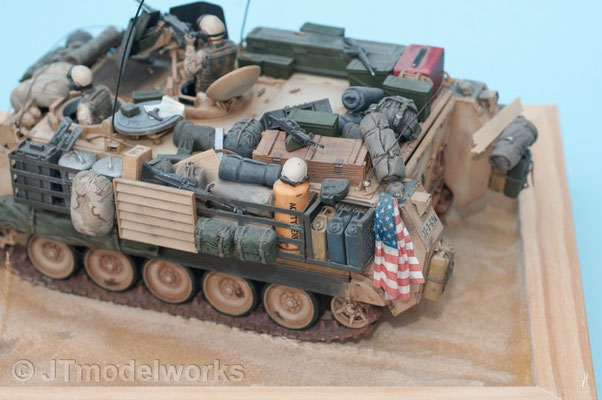 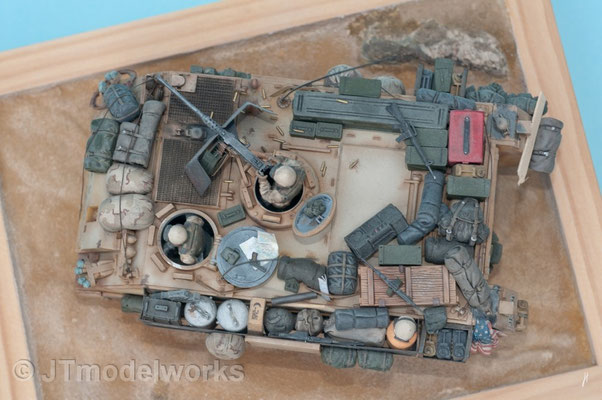 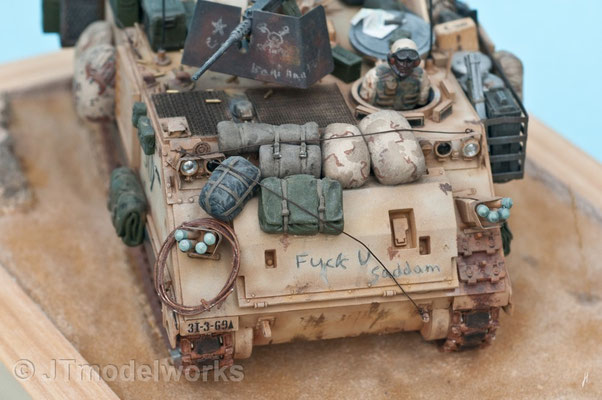 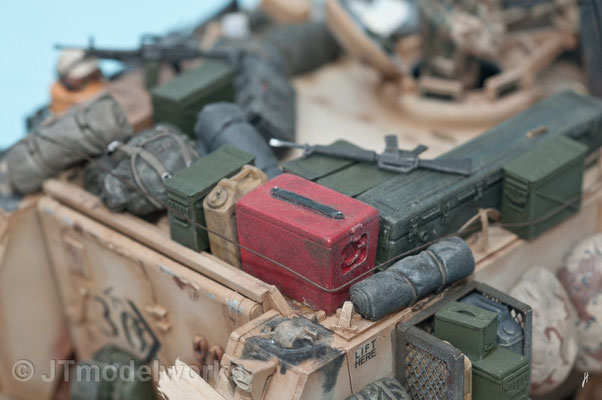