The Grumman EA-6B Prowler is a carrier-based electronic warfare aircraft derived from the A-6 Intruder airframe. The EA-6B is powered by two Pratt & Whitney J52 turbojet engines, and it is capable of high subsonic speeds. Its aircrew consists of four officers, one pilot and three electronic countermeasures officers. The aircraft can carry and fire anti-radiation missiles (ARM), such as the AGM-88 HARM missiles.

The development of the EA-6 began in 1966. It has been in service since 1971 and has carried out numerous missions for jamming enemy radar systems and in gathering radio intelligence on those and other enemy air defense systems. Long time and after the retirement of the F-111 Raven it was the only dedicated electronic warfare plane for the U.S. Forces. Meanwhile, it is becomes more and more replaced by the new Navy's EA-18G Growler since 2009. Following its last deployment in late 2014, the EA-6B was withdrawn from U.S. Navy service in June 2015.

My model illustrates the CAG (Commander Air Group) machine of the electronic attack squadron VAQ-130, also known as the "Zappers" which is home-based at NAS Whidbey Island. The squadron is part of Carrier Air Wing CVW-3 which is still deploy aboard the U.S. aircraft carrier CVN-75 USS Harry S. Truman. The VAQ-130 is the oldest electronic warfare squadron in the U.S. Navy. The carrier and the EA-6B in the illustrated appearance was operating in during Operation Enduring Freedom between 2004 and 2005.

More about the Prowler you will find here.

I've began with the Prowler already some years ago. When I started with the excellent Aires cockpit I was very enthusiastic in the beginning. Unfortunately the basic Kinetic kit isn't that nice and in my opinion very blurry. So, I lost my motivation for a while. Consequently, the pictures of the painted cockpit below are already a few years old. 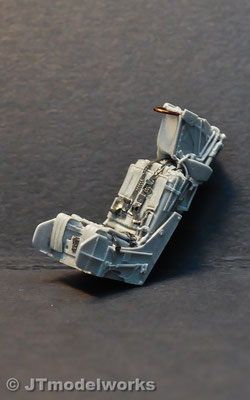 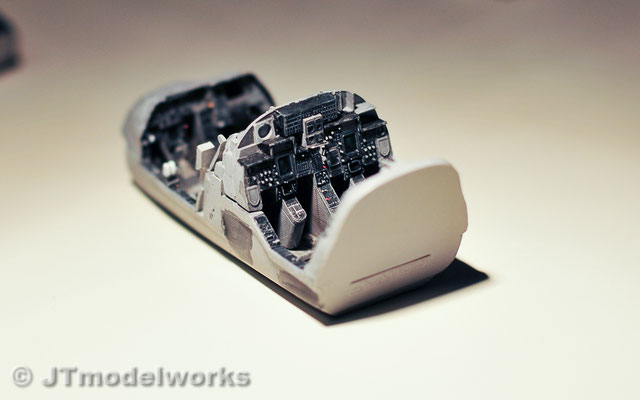 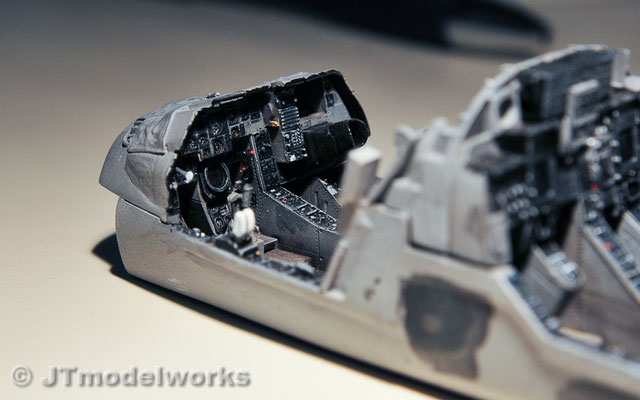 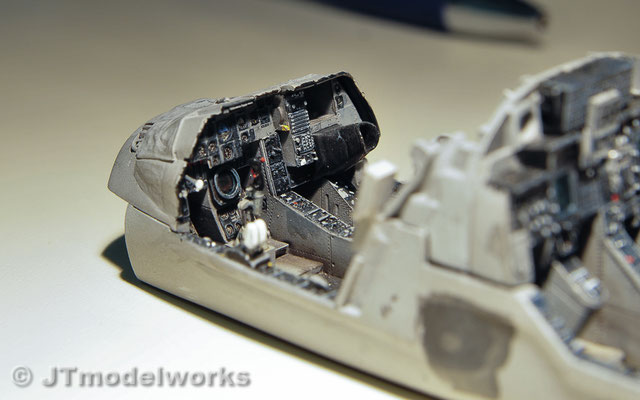 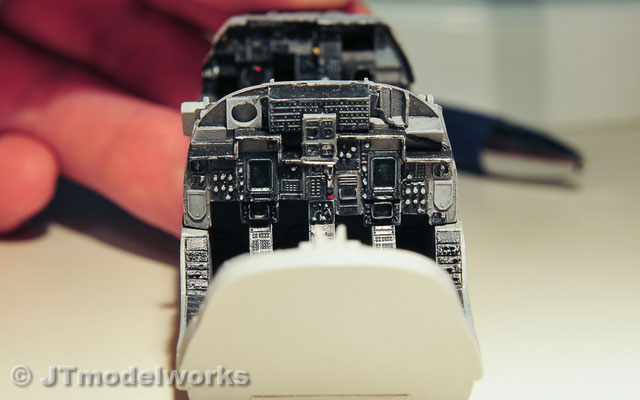 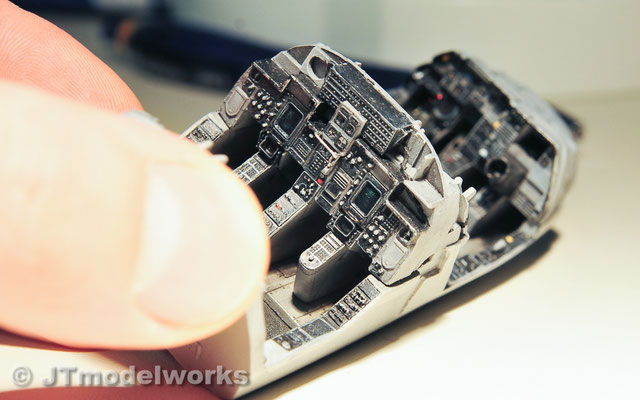 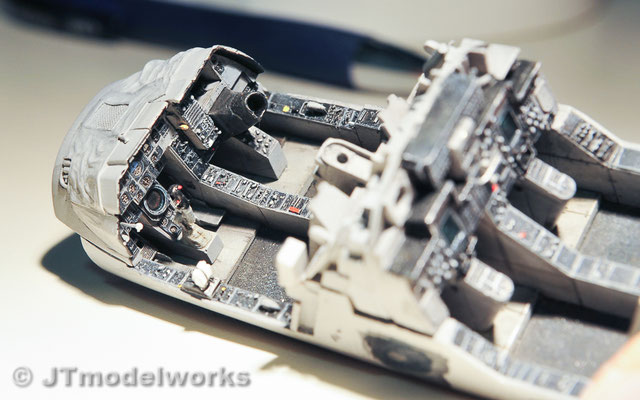 At some point I started building this massive Elevator of the USS Harry S.Truman which is a large copy of the small 1:350 kit on which I will report in due course. After I while I've got the idea to put the Prowler on that Elevator and I resumed my work in 2016. The pictures below show some of my detail work on the fuselage and landing gears and wingfold mechanisms. E.g. for the latter I replaced the original parts with the Wolfpack resin set and added some additional scratch details because the flap profiles looked a bit too flat. The intake covers where made with single tissue layers and thinned wood glue. I still need to finish them with a bit thinned putty. 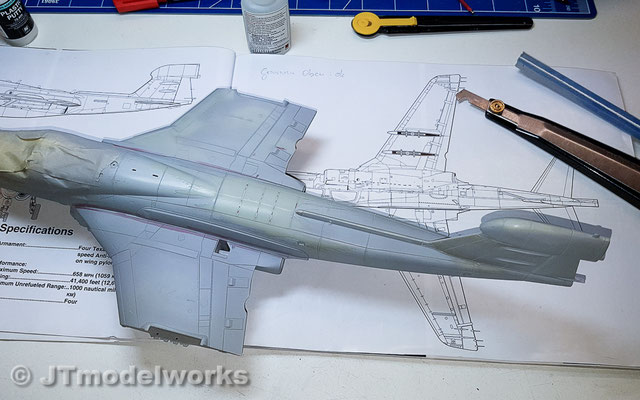 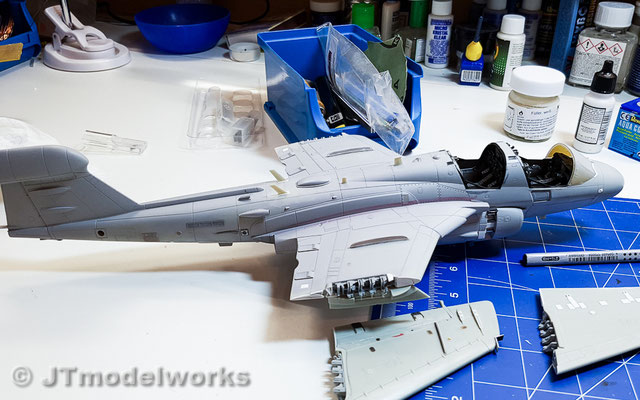 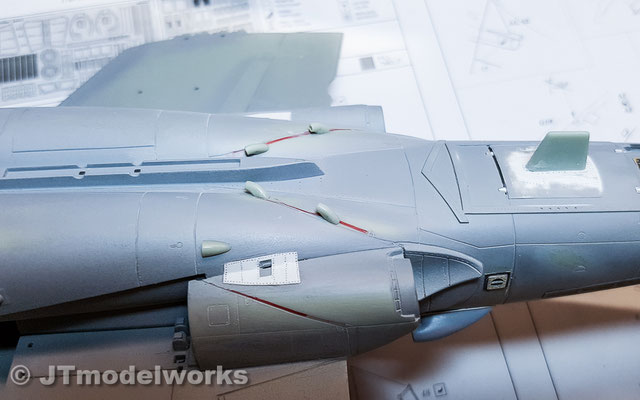 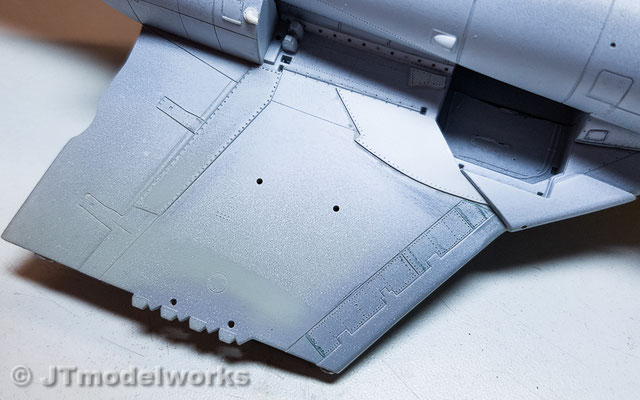 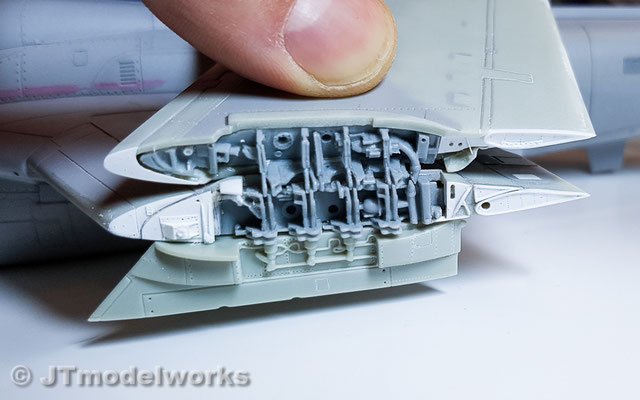 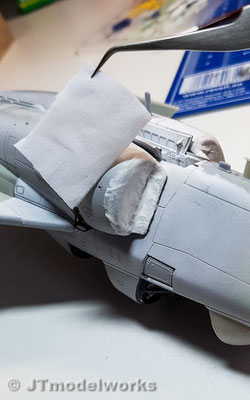 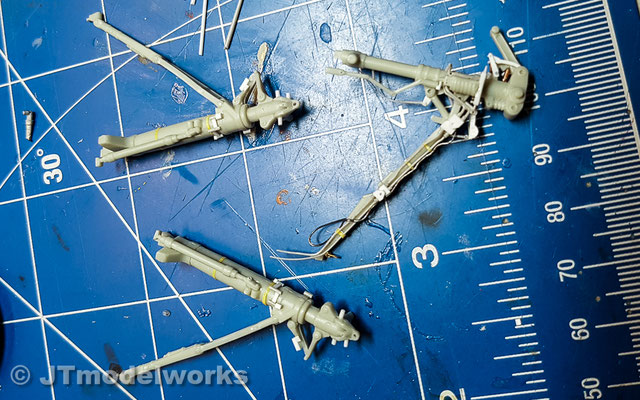 The canopy is worth to be especially mentioned. As you can see on the picture in my introduction, the original EA-6B has a specially coated canopy which appears between gold, bronze, orange, brown and smoke depending from the light situation and weather. Therefore, it a challenge to find a suitable colour or rather sequence of layers. I am hoping that I got it and you can see the slight but still clear metallic effect in the short video below. 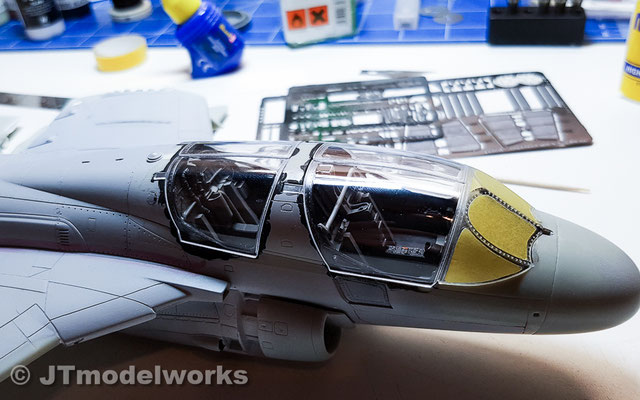